Under “Agency Law” You Are Liable

This is the legal principle of respondeat superior (“let the master answer”) or the master-servant doctrine, which imposes on the principal (the “property owner”) vicarious liability (vicarious meaning “indirectly, as, by, or through a substitute”) under which the principal is responsible for acts committed by the agent (the “property manager”) within the scope of the employment (see Figure 12.2 “Principal’s Tort Liability”). 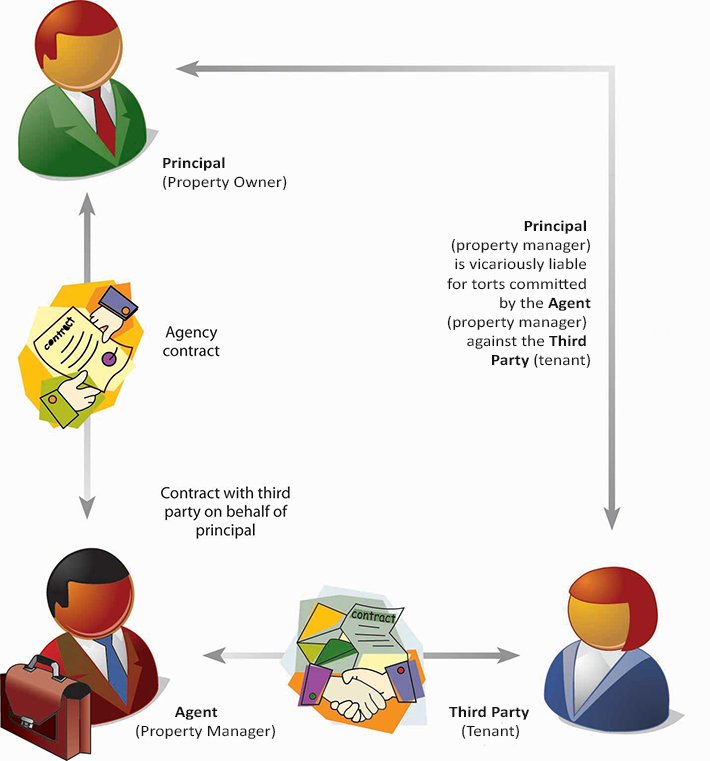 However, when the “deep pocket” of the principal isn’t that deep, the principle of respondeat superior may lead to financial devastation or ruin. Case in point. In the mid-1970s a driver for the world renowned Larraburu Brothers Bakery–at the time, one of the largest sourdough bread makers in the world–injured a six-year-old boy in the process of making a delivery. The bakery was found liable for $2 million in damages. The bakery’s insurance policy had a limit of $1.25 million, and the bakery could not come up with the remaining $750,000. Both the bakery and their insurer eventually filed for bankruptcy. (see https://law.justia.com/cases/federal/appellate-courts/F2/604/1208/7820/)

But let’s suppose an act of negligence involves a violation of federal anti-discrimination law, as set forth in the Fair Housing Act (FHA) (42 USC § 3601 et seq.)? Is the property owner still liable for the action, or inaction, of the property manager with respect to a violation of someone’s civil rights? Under Agency Law, both the owner and manager of a rental property can be held liable for direct and consequential damages, as well as civil penalties, even when the owner is not directly responsible for a violation of the Fair Housing Act. In such cases, the owner may be (1) named as a defendant, (2) subject to civil penalties, (3) incur costly litigation, (4) pay direct and consequential damages, and in extreme cases, (5) face punitive action.

Don’t think something like this will ever happen to you? Consider the following real world anti-discrimination complaint filed in Salt Lake City, Utah, August 2017.

On September 15, 2017, the Disability Law Center (DLC)–a civil rights advocacy group located in Salt Lake City, Utah–filed two complaints (UFHA No. 17-H-0093; UFHA No. 17-7-0094) with the Utah Antidiscrimination and Labor Division alleging that Sdg Enterprises LLC (a property manager) and John Loveless (a property owner) violated the Utah Fair Housing Act (UFHA) by engaging in housing discrimination on the basis of (1) source of income and (2) disability. The complaints were also filed with the U.S. Department of Housing and Urban Development (HUD).

The complaint alleges that on August 17, 2017 a DLC fair housing program coordinator (aka “fair housing tester”) discovered an advertisement online for a 2 bedroom 1 bath apartment in Provo, UT for $795 that stated “We are also unable to accept government housing assistance for this unit.” On August 18, 2017, the DLC tester contacted the alleged property manager to inquire about the owner’s housing voucher policy. The property manager responded “We don’t take section 8 housing.” On September 1, 2017, the DLC tester received an email from a “community stakeholder” (likely another DLC employee, partner or watchdog) regarding the same advertisement indicating the rent amount had been decreased to $750. On September 7, 2017, the DLC “discovered” that the rental amount had been reduced, yet again–this time to $700.

In the complaint the Disability Law Center expressly asserts its belief that the Respondents “treated differently and denied rental to potential tenants on the basis of source of income, which is a violation of the State Fair Housing Act.” Then for good measure, and in an attempt to strengthen it’s position, the DLC continues by implying that by lowering the rent amount from $795 on August 17th to $750 on September 1st, and then to $700 on September 7th the property manager, and vicariously the owner, were in some way engaging price discrimination. (See Exhibit 1)

Are you kidding? Haven’t you ever lowered rent on a vacant unit at one time or another to get it filled? Most property owners have. 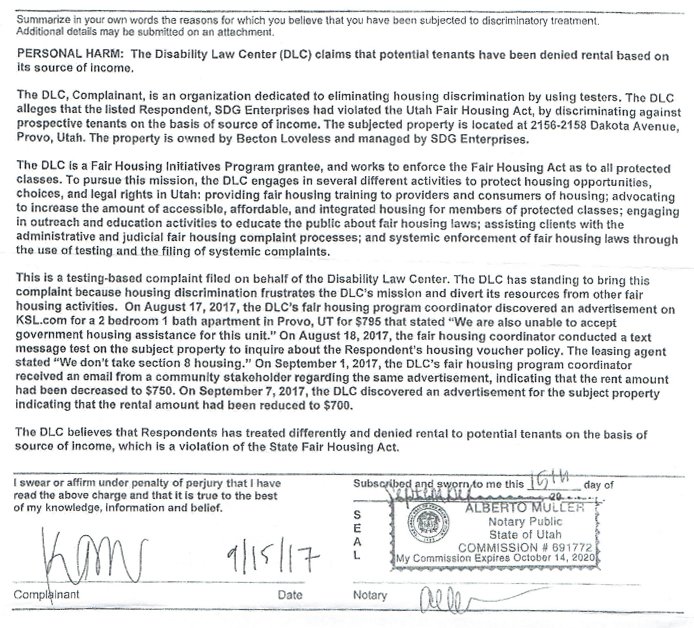 The complaint alleges that on August 17, 2017, a DLC fair housing program coordinator (“fair housing tester”), discovered an advertisement online for a 2 bedroom 1 bath apartment listed for $795 that stated “NO pets.” The same day the DLC tester, representing himself as a prospective tenant, contacted the leasing agent to inquire about the owner’s assistance animal policy. The alleged property manager responded that the owner would allow the assistance animal, but there would be an additional deposit of $205. The DLC tester asked if the fee could be waived for the animal, and the leasing agent stated the owner would not waive the additional fee. It was also noted in the complaint that on September 1, 2017, the DLC tester received an email from a “community stakeholder” (likely another DLC employee, partner or watchdog) regarding the same advertisement, indicating the rent amount had been decreased from $795 to $750. On September 7, 2017, the DLC Tester discovered that the rental amount had been reduced, yet again, to $700–suggesting some form of pricing descrimination.

In the complaint the Disability Law Center asserts that the Respondents “denied rental, refused to accommodate a disability and established different terms and conditions to a potential tenant on the basis of disability, which is a violation of the State Fair Housing Act.” (See Exhibit 2) 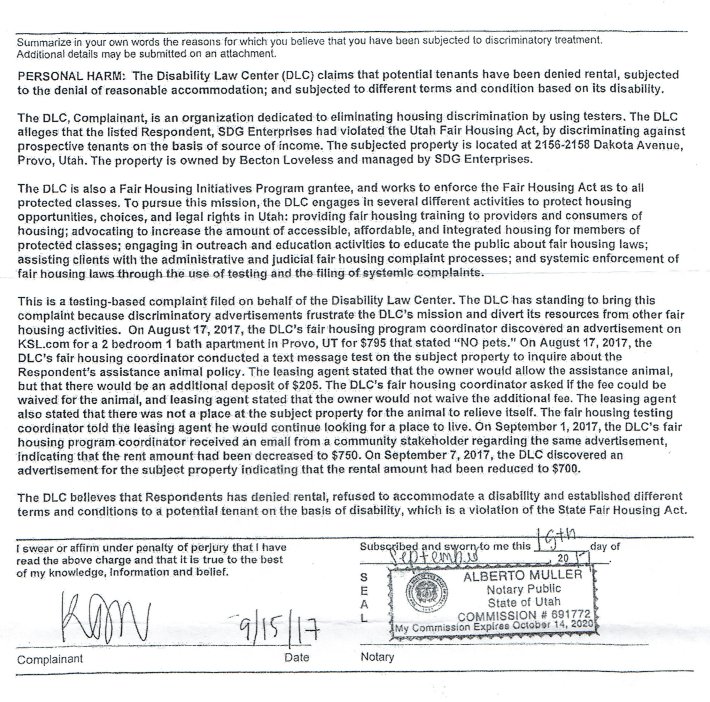 What’s important to note here is that in both complaints the owner of the property was named as a defendant–even though he had no direct involvement in or knowledge of the violations that had been committed.

So how serious is an unintentional infraction of the Fair Housing Act? Pretty Serious. Consider the following abstract for Kent State University.

In 2016, Kent State University agreed to pay $145,000 to settle a civil lawsuit alleging discrimination against disabled students by not permitting them to keep a therapy dog in on-campus housing. Kent State agreed to pay $100,000 to the former students, $30,000 to an organization that advocated on behalf the students, and $15,000 in fines to the U.S. government (not to mention attorney’s fees). Not surprisingly, the university was also required to adopt a new policy allowing students with disabilities to be able to keep therapy animals in on-campus housing. (See Disability Compliance for Higher Education; Volume 21, Issue 10, page 9, May 2016.)

So isn’t a slap on the hand sufficient for such offenses when committed by the unwitting property owner or property manager? Not always–not when it involves defendants with deep pockets. Civil litigation is big business and lawsuits are on the rise. But don’t think that such cases are reserved to the “Kent State” universities out there and large apartment complexes. Such complaints and lawsuits are now popping up with landlords and property managers nationwide. Just read to the recent headlines.

Interestingly, many civil lawsuits filed on behalf of disgruntled tenants, and prospective tenants, involve landlords that employ property managers. If you think you’re immune, too small, or too far removed from the situation to be found liable because you hired a property manager, think again!

So do you have commercial liability insurance? Good. You should. But it probably won’t save you if you get caught up in a civil suit due to negligence as a result of vicarious liability relating to a violation of the Fair Housing Act.

The following is the transcript of an email correspondence between a property owner and his insurance company regarding liability coverage for a civil judgment as a result of a property managers negligence.

“… what I need to know is if my [NATIONAL INSURANCE PROVIDER] policy provides any liability coverage for a civil judgement against me as a landlord/owner in the case of a violation of a tenant’s, or prospective renter’s, civil rights.

For example, let’s assume that my property manager inadvertently violates a statute of the “Fair Housing Act” by telling a prospective renter that they/I do not accept section 8 housing. In turn, the prospective renter names me as a defendant, along with my property manager, in a civil lawsuit for violating their civil rights under the Fair Housing Act. What if, under “Agency Law”–which states a property owner is responsible for the actions their agent (in this case my property manager), I am found liable and ordered to pay the plaintiff (in this case the prospective renter) $60,000 in damages. In addition, I’m fined $16,000 by the state where I reside–the penalty for a first time violation of the Fair Housing Act–, ordered to pay $20,000 to the “community” to promote awareness, and have to pay out $10,000 in attorney’s fee to defend myself.”

This example may seem a little far fetched, but unfortunately liability suits, relating to violations of civil rights, are becoming more common. So I am curious, what coverage, if any, does a commercial insurance policy provide under this scenario?

“I have talked with my friend as well as my underwriter about this and there really isn’t a way for you to carry coverage for someone else’s exposure, even though you are indirectly tied to this…”

The reality is that income property owners face more liability today than ever before. There are, however, strategies for mitigating the risk of liability associated with owning and managing a rental property. One of the best strategies for decreasing exposure to risk and liability is to hire an experienced property management company. Given the lack of protection afforded by most commercial liability insurance policies for vicarious tort liability, it may also be prudent, if possible, to place income producing properties within a real estate holding LLC.

Most importantly, never forget, at the end of the day, you as the property owner are ultimately responsible for your properties.

Author: Becton Loveless
Becton has been a multifamily housing investor since 2005. He is a property management specialist, former insurance agent and financial advisor. He has a Bachelor of Arts degree from Brigham Young University.... read more
You may also like 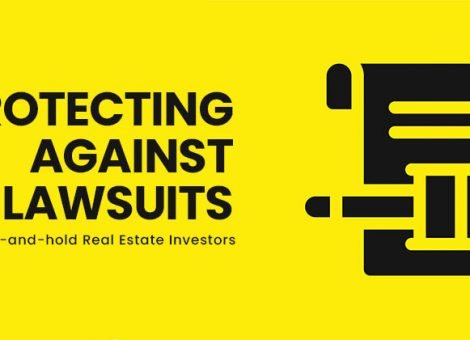 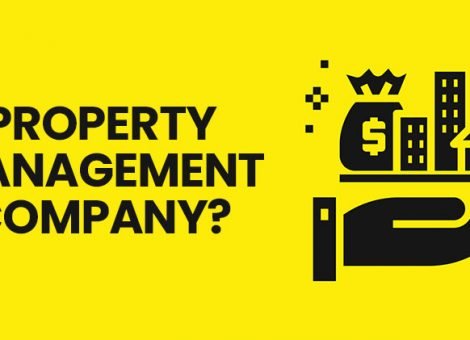 When should you hire a property manager?